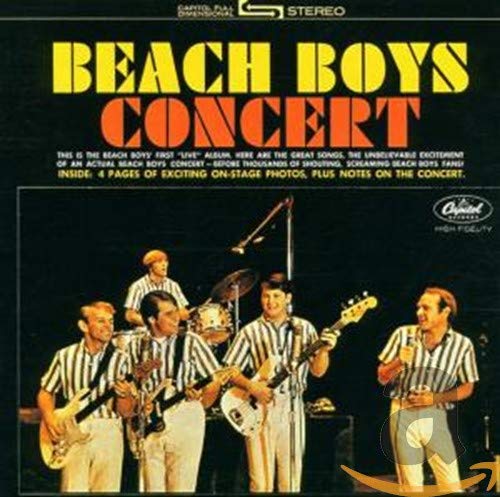 1964 and 1968 live recordings let you hear how far the band had come! Concert was, in fact, their highest-charting album. Includes bonus live versions of Heroes and Villains and Don't Worry Baby .

Like virtually every band in the mid-'60s, the Beach Boys were expected to deliver their hits in person--no mean feat considering the ever more baroque concoctions that Brian Wilson was constructing in the studio. Tellingly, at the time the 1964 Concert was recorded in Beach Boys hotbed Sacramento, the band had but a few hits of their own and so they padded their set with Jan and Dean's "Little Old Lady from Pasadena" (cowritten by Brian), Dion's "The Wanderer," "Papa-Oom-Mow-Mow" by the Rivingtons, Bobby Pickett's "The Monster Mash," and, of course, Chuck Berry's "Johnny B. Goode." The instrumental backing here is sparse and simplistic; it's the band's vocal interplay that carries the day before a throng of screaming fans. By the time the year was out, Brian suffered his first nervous breakdown and gave up touring to concentrate on his studio productions.

Live in London was culled from live shows recorded at a time (1968) when the band were virtual pop-cultural outcasts in their home country, but still enjoyed an enthusiastic following in England. These recordings document the Beach Boys' remarkable resilience in the face of Brian's deliberate distancing and their frigid American career prospects; when the going got tough, the tough got spectacularly professional. Augmented by a horn section, the band locks into a powerful groove, giving energetic, largely note-perfect versions of the expected hits along with some key album cuts. Digitally remastered, this long out-of-print twofer edition features commentary by David Leaf (The Beach Boys and the California Myth), as well as two bonus cuts: a 1964 concert rendition of "Don't Worry Baby" and a 1967 live version (from the unreleased Lei'd in Hawaii album) of the challenging "Heroes and Villains" that features a rare appearance by Brian Wilson performing with the band. --Jerry McCulley

What’s Left of Communism in China?

Capitalists, once detested, are now welcomed into the Chinese Communist Party.

Because of their association with the United States, many members of disability-rights organizations in Afghanistan are at risk.

The beginning of the end of roe

Will the Biden Administration Get Bolder on Improving Abortion Access?

The FDA’s announcement that it will permit abortion medication to be sent by mail is a start—but advocates are hoping for more.

“Roe v. Wade” Will Functionally Cease to Exist in Texas

Unless the Supreme Court steps in, the country’s most dangerous anti-abortion law will go into effect, banning abortions after six weeks and placing a cash bounty on providers.

If “Roe v. Wade” Is Overturned, the Future Will Be Worse Than the Past

When abortion was illegal, there was no organized, aggressive antiabortion movement with a wing of violent fanatics.

Go Ahead, Worry! A Worst-Case Scenario for American Democracy

The American far right has transformed politics in unprecedented ways. Can this be reversed?

The Battle of Blair Mountain saw thousands of miners battling cops’ machine guns—and enduring aerial bombardment. Yet today hardly anyone remembers a thing about it.

Despite passing a landmark bill banning new contracts with the agency, there’s still a long way to go to truly abolish it at the state level.

Can “Lottocracy” Save Democracy From Itself?

The Costs of 20 Years of War

For Haitian Prime Minister Ariel Henry, the weekend’s earthquake is virtually a gift from God.

“Hear Our Cries”: What Terrifies an Afghan Women’s Rights Activist

K, an anonymous advocate for Afghan women, speaks out while hiding from the Taliban in Kabul.

The Middle East Is Draining Its Water Supply

Drought and government action threaten the dozens of civilizations that have been nourished by these waters for millennia.

America Can Afford Biden’s Investments at Home. Look at How Much It Spent on Wars.

Barbara Lee Has to Vote

What Can Democrats Do to Fight Texas’s Abortion Ban? Lots.

Why Are We Minimizing the Story of the Would-Be Capitol Bomber?

The Rhetoric of Pop Psychology

How Capitalism Has Made the World Sick

In his new eight-hour epic, the British filmmaker offers a globe-trotting chronicle of our times.

Can one tell the story of a country through one family?

The Appeal of Ordinary Millennial Experience

Rainesford Stauffer proposes a different way to understand a generation defined by precarity and overwork.

Plus Eric Foner on Black politics and history.

Listen: High School Football in the Shadow of the Nation’s Capital

View: Mexico Could Soon Become the Largest Legal Marijuana Market in the World

But activists say the law fails to address the widespread pain that decades of militarized enforcement have caused.